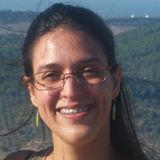 Kelly Nancy Adelina de Oliveira is Portuguese-Brazilian, born in 1979 in Recife-PE/Brazil. She completed her Degree in Geography at the Federal University of Pernambuco – UFPE (Brazil) in 2009, after an exchange at the Instituto Superior das Ciências do Trabalho e da Empresa – ISCTE-IUL, in 2007 with a scholarship from Santander Totta.
In 2011, he started the Master’s course in Geographic Information Systems – Technologies and Applications at the Faculty of Sciences of the University of Lisbon, having concluded in 2013 after an academic-professional internship (11/2012 to 11/2013) at the Geographic Institute of the Army, with for the preparation of the Master’s dissertation, within the scope of the Multinational Geospatial Co-production Program.
From 2014-2015, he carried out geoprocessing consultancy in research projects supported by the Aggeu Magalhães Research Center (CPqAM), Recife-Pernambuco/Brazil, where he was responsible for the 1st phase of the geoprocessing work of the research project “MCT/CNPq Nº 14/ 2013”, supported and financed by CNPq, and for guiding scientific initiation internship work.
From 08/2016 to 05/2017, she worked as a Researcher at the University of Coimbra, in Human Geography and GIS within the scope of the PTDC/DTP-SAP/1520/2014 Project funded by FCT – Fundação para a Ciência e a Tecnologia.
On 10/2018, she joined the PhD in Geography, offered by the Institute of Geography and Spatial Planning (IGOT) of the University of Lisbon, where she has successfully developed her activities as a doctoral fellow at the University of Lisbon. In this Institute, she has also cooperated with the faculty, acting as a teacher of theoretical-practical classes of the discipline “Geographic Information Systems” of the 1st cycle. As a result of his scientific activity, he has some publications and communications.